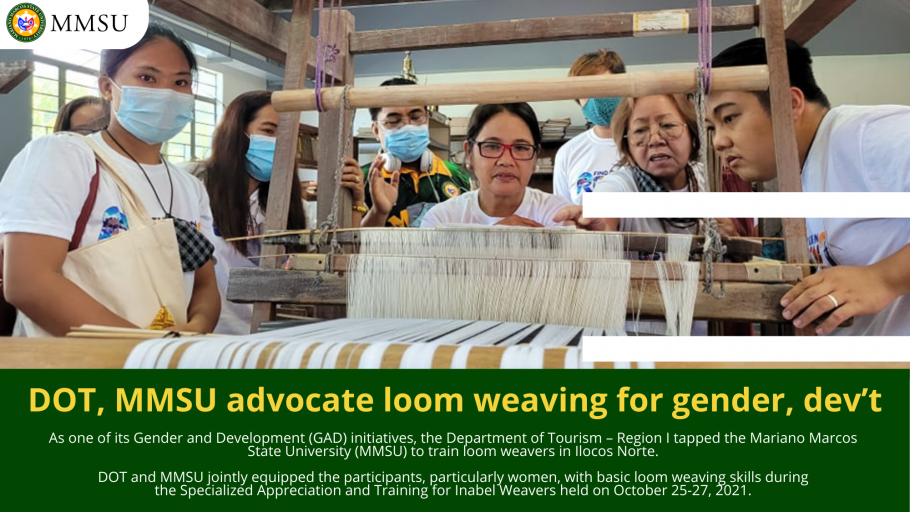 As one of its Gender and Development (GAD) initiatives, the Department of Tourism – Region I tapped the Mariano Marcos State University (MMSU) to train loom weavers in Ilocos Norte.

DOT and MMSU jointly equipped the participants, particularly women, with basic loom weaving skills during the Specialized Appreciation and Training for Inabel Weavers held on October 25-27.

Evangeline M. Dadat, chief tourism operations officer of DOT-Region I, said, “We find it a good cause to preserve and support loom weaving, and to empower individuals to venture into tourism and livelihood activities.”

In the training, 29 participants applied basic steps in setting up the loom, performed tabby or plain weaving, and created simple patterns and weaving drafts. They came from Batac, Dumalneg, Pinili, Sarrat and Paoay.

She said they will enhance the learned skill for them to produce their own costumes and products, and promised to encourage youth to be involved in abel weaving.

Dr. Lawrence A. Eclarin, principal investigator of the Abel Iloko project and chair of MMSU’s Department of Mathematics, said the University has been aggressive in promoting the loom weaving industry.

This led the University to conduct training programs in selected Ilocos Norte towns. In 2020, MMSU and DOST Region I launched INABEL (Innovations on Native Attires, Bracing and Encouraging Livelihood) project in Dumalneg to promote the culture of the indigenous peoples (IPs) through weaving of ethnic attires.

‘Inabel’ or ‘abel’ is a woven cloth that has served as a cultural identity and embodies the artistry and ingenuity of the Ilokano people. (StratCom)