Dagiti Tallo a Virgen by Melver Gomez, a faculty member of the Department of Languages and Literature, won the Top Foreign Film award by the Kolkata Online International Film Festival last September 16.

An experimental film about the dilemma of choosing between passion and career, Gomez’s film stood out from the 300 films which competed in the rigorous selection process by the India-based film award-giving body.

“The culture and traditions of the Ilokanos are unique. I find it only fitting to share these to the world by using our own language— Ilokano— in my films,” shares Gomez when asked why he started his film-making career.

He was also selected, out of 1,200 applicants, to join sixty other film-makers in the country in the virtual Ricky Lee Film Scriptwriting Workshop (Batch 24) last April 2. The workshop is still ongoing.

Handling literature and humanities classes this semester, Gomez is imparting to his students the significance and power of storytelling and the arts. 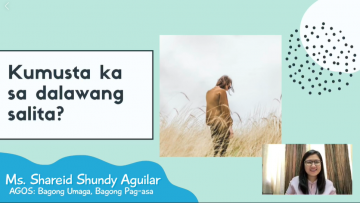