Celebrating its achievements amid the crisis, Mariano Marcos State University (MMSU) conducted its Anniversary Convocation at the Teatro Ilocandia and via its virtual platforms yesterday, January 20.

In her SOUA, Dr. Agrupis presented how MMSU persistently committed itself to excellence and service to people despite the enormous toll of the COVID-19 pandemic.

She presented how the university accomplished more in the areas of instruction, research, extension, production, linkages and partnerships, vibrant campus environment, and management.

In 2021, MMSU produced the biggest number of programs that produced top passers and posted high passing rates in licensure examinations; opened its Center for Flexible Learning and upgraded its Virtual Learning Environment; and attained Level IV accreditation in its 11 programs. Also, the faculty continued to toughen with the 42% increase in the number of doctorate degree holders.

Also, with the efforts of its administrators and employees, MMSU now houses two Niche Center in the Regions (NICERs) for research and development; became a part of three international consortia; completed major infrastructure projects; completed and submitted its Land Use Development and Infrastructure Plan; reached a 99% vaccination rate among its employees and its students; and, qualified for the bronze award for the Program to Institutionalize Meritocracy and Excellence in Human Resource Management (PRIME-HRM) of the Civil Service Commission.

Full speech can be accessed at https://mmsu.edu.ph/publication/2022_SOUA.pdf/view.

“Here in MMSU, we seized every opportunity, explored more possibilities, and committed ourselves to making positive change in the lives of our people, always staying true to the vision of our founder, and constantly committing ourselves to excellence,” she expressed in her fifth SOUA.

She bared that MMSU will be transforming itself into a “University of the Future” by fully embracing the Fourth Industrial Revolution (FIRe) as the new norm in its operations to stay relevant and responsive amid various crises.

FIRe is a system of education designed for an automated data exchange system in manufacturing technologies that include cyber-physical systems, cloud computing, and cognitive computing.

“Your accomplishments despite the pandemic are truly amazing and could have only been made possible by clear vision coupled with strong resolve to achieve,” remarked Environment and Natural Resources Secretary Roy A. Cimatu, who served as the guest speaker in the program.

The DENR secretary also expressed his interest to collaborate with MMSU through the enhanced National Greening Program focusing on nipa propagation for ethanol production. In 2018, the agency forged a memorandum of agreement with MMSU and other seven state universities for the establishment of a 170-hectare nipa plantation in support of the program.

Former members of the MMSU Board of Regents and Administrative Council (AdCo) were also recognized for their service to the university.

Also, representatives from other government agencies and state universities and colleges (SUCs) who have been MMSU’s strong partners attended via Zoom. (StratCom) 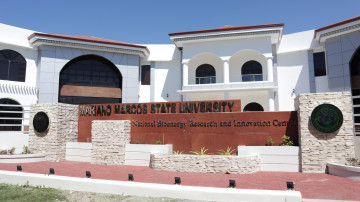